When it comes to examining the extraordinary, complex, and often confounding life and work of Salvador Dalí, you never quite know how – or if – you’ll connect the dots. But sometimes the solution comes when you least expect it.

Such was the case recently. In the most oddly-timed, esoteric, yet fascinating of ways.

It involves the interesting painting, Melancholy, Atomic, Uranic Idyll. This strange and haunting composition is a dramatic statement by Dalí on the horrors of war, with World War II obviously on the artist’s mind as he executed this 1945 canvas.

Stay with me. Because I’m about to connect the dots in what I think is an intriguing way. One that is not my interpretation, but Dalí’s own explanation. Delivered in the most unlikely of contexts.

In Melancholy, Atomic, Uranic Idyll, virtually the entire scene is a dark, foreboding sort of underground space – a suggestion created by the appearance of a hint of daylight in the upper right, where bomb-dropping spider-legged elephants are on the march, together with an angel-like figure before them. 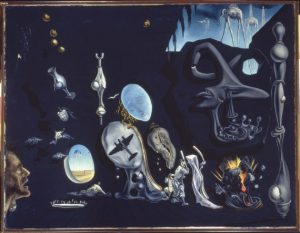 Elsewhere, human facial features are poignantly supplanted by a bomber airplane unleashing its deadly load, while at lower left an anguished-looking man is seen, out of whose neck an orb descends – and that is where we begin to connect some dots.

Because, in Salvador Dalí’s remarkable mind – while he was in exile in the United States during the war – he associated baseballs (orbs) from America’s favorite pastime with bombs dropping from the sky!

We see them from the aforementioned man’s neck; raining down from the upper portion of the canvas; from the right cheek of the face formed by the bomber; from the pachyderms mentioned earlier; from the baseball bat-like shape running vertically along the right side of the painting; from a crutch and vase – even out of the face of the baseball player swinging his bat.

Why baseball? Was it merely that the balls make a conveniently plausible metaphor for bombs?

For years, I presumed it was simply Dalí melding two starkly contrasting realities: the horrors of the raging war, and the persistence of America’s favorite sport (speaking of “Persistence,” notice the long soft watch on the side of the bomber face). He was, after all, now residing in New York City, and wouldn’t return to Spain for another half-decade. One could not help but be exposed to baseball, if only on television.

But my conjecture was replaced by fact – straight from Dalí’s mouth – when I finally got to see him recently on a clip of the old Dick Cavett show. As fate would have it, baseball legend Satchell Paige was also one of Cavett’s guests that evening. So, when Cavett was growing increasingly confounded by Dalí’s hard-to-follow loquaciousness, he digressed by asking the artist if he liked baseball.

Dalí said he did not, explaining that he was familiar with the game only through photos – not actually viewing the sport in action – and that everybody was always “on the ground, in the dust – looking melancholy.” Dalí even emphasized his point by leaning over toward the floor, in a kind of gesture of depression, to further illustrate what he meant.

And that was my “Aha!” moment. There’s where the “Melancholy” in the painting’s title comes in. And that’s why Dalí appropriated the sport of baseball here – to symbolize a sense of melancholy. And the balls-turned-bombs made perfect sense. It was, in a way, genius!

Or at least genius, Dalí-style. And, if you look at the painting carefully, you’ll even see a couple of players sliding in the dirt  and the dust.