One thing Dalí is best remembered for is his mastery of the double-image. What fun he must have had orchestrating and executing these eye-fooling, mind-bending visual effects. And what fun we have enjoying them, because most everyone likes to be astonished by great, engaging, sometimes playful art.

One of the best examples of Dalí’s double-imagery is “Apparition of Face and Fruit Dish on a Beach” (1938). I’ve seen this picture in Dalí’s “Optical Illusions” traveling exhibition, when it opened in Hartford, Connecticut, and again some years later in a special exhibition in Toronto, Ontario, Canada. 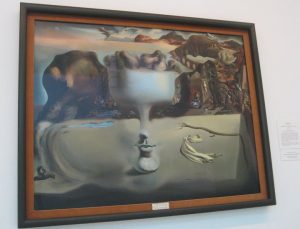 In typical enigmatic, intentionally confusing fashion, nowhere in its title is the most prominent image mentioned – that of the large beagle dog. Its body emerges from various details of entirely different elements: a bridge or aqueduct doubles as its collar; its snout is a white winding road; its eye is a whole cut through mountainous background terrain; its right front paw is at the same time the “foot” of the white fruit dish; and the top of the dog’s back simultaneously serves as an arrangement of pears.

Meanwhile, the stem of the dish becomes the bridge of the nose of the central face, whose eyes are formed by a shell (or is it a vase?) and a sleeping child, while the lips are one and the same with the back of a veiled seated woman.

The table-like beach – or the beach-like table – recalls Dalí’s  canvas, “Transparent Simulacrum of the Feigned Image,” also of 1938; both also feature a strewn white cloth. And both feature fruit in a dish – fruit that doubles for something else as well.

So why was Salvador Dalí so fascinated with double-images?

I think the answer is two-fold. Dalí loved visual phenomena and optical illusion. I think he fancied himself as something of a magician, an alchemist. He could turn a dog’s dark nose into the highlight of a distant passageway better than anyone else. And he knew this kind of thing was simply clever and fun.

A second reason for Dalí’s focus on double-imagery is that it was a technique consistent with the notion of true paranoia, a phenomenon with which Dalí was obsessed.  He knew that actual paranoid people often see things that aren’t there. Or think they do, I should say.

Dalí went on, in fact, to devise his so-called “Paranoiac-Critical” creative method, essentially a system whereby he would invoke a paranoid state to produce the kind of visions paranoids might have – hidden images, double-images, disappearing images – yet possess the “critical” ability to transcribe these visions onto canvas, so that the rest of us may see them.

There are additional and impressive double-image details in “Apparition of Face and Fruit Dish on a Beach,” especially in the distant space under the dog’s head. It reminds the astute Dalí observer of the kind of endless background double-imagery we find in another great Dalí painting, “Impressions of Africa” – and, yes, this one was also painted in 1938.

Colorful, beautifully painted, and full of visual surprises, “Apparition of Face and Fruit Dish on a Beach” is truly one of Dalí’s best examples of pure surrealism – and a favorite work in the collection of the Wadsworth Atheneum in Hartford, Connecticut.