Sometimes the things that are hardest to write about are, ironically, the things you love the best. All objectivity is nearly impossible to come by. Emotions take hold. And then, who knows?

Where to begin? I actually love the subtitle, not often considered but quite fitting: “In Search of a Cosmic Unity.” There really is an overpowering sense of unity in this grand picture, and the cosmos seems to come together in one glorious and harmonious heavenly composition. The hues of blue Dalí chose are mesmerizing (they MUST be seen in person) and the very scale of this wall-sized canvas results in an awe-inspiring, truly overwhelming sense of wonder and grandeur. 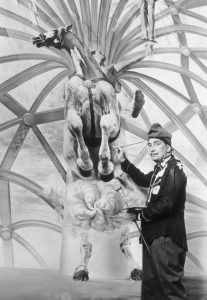 Santiago El Grande means St. James the Great, and Dalí’s depiction of the Apostle is surely one of the finest images he’d ever painted of a human being. Unlike a sword that is often seen brandished by St. James in sculptures of Spain’s patron saint astride his rearing steed, here Dalí replaces that weapon with arguably a far more powerful one: Jesus on the cross, with everything leading our eye toward the heavens.

St. James is said to have risen on his majestic horse from the sea, and the motif of scallop shells seen in “Santiago” is symbolic of that event. An unwittingly amusing story here is how one observer of the painting was perplexed as to why part of the horse seemed “out of focus.” That was not the case at all; instead, the partly gauzy look was Dalí’s depiction of the partially wet horse, having arisen from the aforementioned water! It made perfect sense, and Dalí was being ever the perfectionist.

Another popular notion about this spell-binding painting is that it’s especially poignant and impressive when viewed…..from a position lying on the floor below it! No, not a misprint. The work was originally intended to be installed high on a church altar, and authorities say that viewing it in this fashion — thanks to the foreshortening of certain details — approximates that special low-angle effect. (see photo). 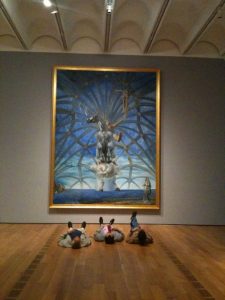 The spectacular vaulted background, populated with countless angelic figures in minute detail, owes to the ceiling of the Church of the Jacobins in Toulouse, France, where St. James is believed to be buried. The cylindrical column of the church’s fixture is seen behind the horse’s rear hoofs, but then morphs into an atomic cloud burst – representative of the atomic age that was influencing Dalí mightily at this point in his career – at the center of which is a jasmine flower, a symbol of purity and perfection. 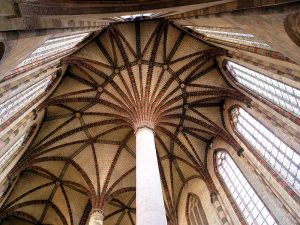 Gala is seen in a trenchant, shrouded pose in the lower right, continuing a tradition where Dalí included an image of her in most of the large-scale masterworks painted between 1950 and 1970.

In “Santiago El Grande,” Dalí blended a classic theme with contemporary sensibilities. He demonstrated that his painting skill was on part with Raphael. And he expressed what he was thinking and feeling at the time: that man’s salvation lay in the great truths and promises of Christianity.