While we can always admire any Salvador Dalí painting for its imaginative nature and impressive technique, sometimes the meaning of his works leave us with more questions than answers. For this blogger, that’s certainly the case with Dalí’s 1939 oil on canvas, “Philosopher Illuminated by the Light of the Moon and the Setting Sun” (private collection). 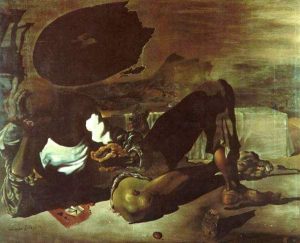 This is surely one of the least-known of Dalí’s paintings, and certainly one of his darkest – mainly in the literal sense, based on the somber, dark color palette, but additionally in the strange sense of unease about the picture.

What might Dalí have been telling us with this work?

The barefoot human figure himself – the philosopher – sports torn clothing, props up his head forlornly, and does not reveal even a hint of what his face might look like. He is literally in the dark here. What’s more, a bizarre and rather foreboding dark object appears in the sky above him. What is that: an oval-shaped moon? A menacing cloud? A strange space ship? A rocket or bomb or some other formidable entity?

Moreover, is it convex or concave? Is it a kind of tear in the sky, such that one could enter through that large dark opening into some unknown space, some unknown future? Or is it an object about to crash into the man’s head?

And what are we to make of the German shepherd dog seated behind the man’s left elbow? Is the man contemplating his finger nail? Reading what appears to be a note on the ground before him? Is it perverse to discern that the shape of his left hand has a masturbatory suggestion to it? And, especially vis a vis the dog, why does the man seem so enormous?

Finally, why do I always look at that paper on the ground and see it as a Valentine? Appropriate, as this blog is being written two weeks before Valentine’s Day, but is that actually a black heart on red paper, or merely my imagination seeing what wasn’t necessarily intended?

I warned you that this strange painting raises more questions than answers!

But there are also some clues that may help us decode Dalí’s intent here, at least partly.

One is the year the work was painted – 1939. No coincidence that it was the beginning of World War II, a dark time in human history. Is “Philosopher Illuminated…” a metaphor for the sense of depression and apprehension Dalí – and the world – was feeling as mankind was on the brink of a devastating global conflict?

Another way to often approach such paintings by Dalí is to consider what works by other artists may have influenced his thoughts and ideas. It could be the case that Dalí modeled his overall composition to a 1781 painting by Joseph Wright of Derby – a portrait of the 18th century poet, Sir Brooke Boothby, seen here. 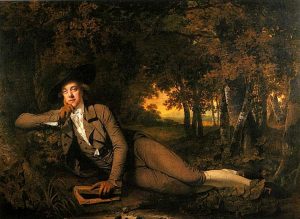 Portrait of Sir Brooke Boothby by Joseph Wright of Derby

Dalí has left us with a whole lot of questions to ponder in this little-known but quite powerful painting.