Spain leaps to mind, of course, when we think of Salvador Dalí. Dalí, after all, was as Freud described him: “a complete example of a Spaniard.” And Freud added, “What a fanatic!”

But for those of us fortunate enough to live in the United States, we’re blessed with a generous and delicious bounty of Dalí eye-candy. It occurs to me that Dalí is scattered throughout the country —  like his own creeping swarms of ants!

Moving west to eat – and I know I’m omitting some – there’s the Salvador Dalí Society®, Inc.© of Torrance, Calif. – publishers of this blog; the leading U.S. dealer in Dalí prints and other works; and publisher of the forthcoming double-volume Salvador Dalí Prints: The Catalogue Raisonne (www.dali.com).

The Fine Arts Gallery of San Diego has Dalí’s painting, Spectre De Soeil, while, in the Santa Barbara Museum of Art, you’ll find Beach Scene and Head of Woman (Gala). But the headliner there is one of Dalí’s best surrealist oils: Honey is Sweeter than Blood of 1941. 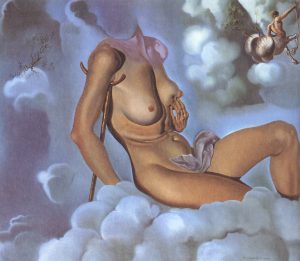 Gala Placida of 1952 hangs in the University of Arizona Museum of Art. Continuing east, The Kresge Art Center Gallery at Michigan State University owns Remorse, or Sphinx Embedded in the Sand (1931). Further east you can take in the beautiful first smaller version of Madonna of Port Lligat (1949) at Marquette University in Milwaukee, Wisconsin. 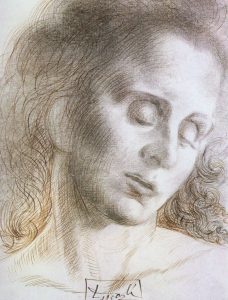 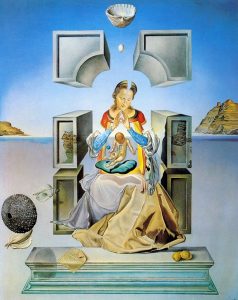 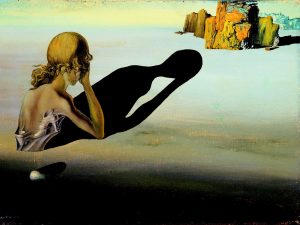 Several nice prints are in the Sheldon Swope Art Gallery in Terre Haute, Indiana, including the great etching, The Grasshopper Child (’32). 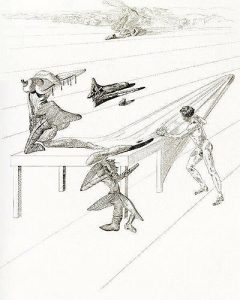 The Windy City – Chicago – boasts the important oil, Inventions of the Monsters; the fine pencil drawing, The City of Drawers; and the famous gouache on commercial paint, Face of Mae West Which Can be Used as an Apartment. 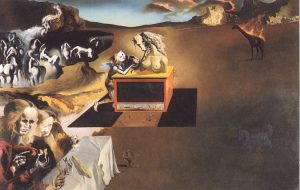 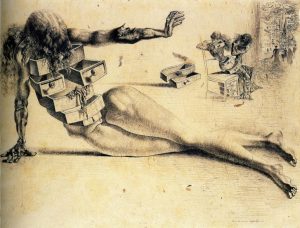 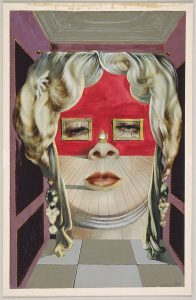 Continuing east, America includes the great city of Cleveland, Ohio, which for years has owned the etching, St. George and the Dragon, but some years ago accessioned The Font, which must be seen in person to be fully appreciated. I drove to Cleveland expressly to see this painting, and was astonished at the 3-D effect of the woman’s eyelids, owing to a heavy impasto. The Cleveland museum also owns the 1940 circular glass bowl, The Sleep of Nautilus. 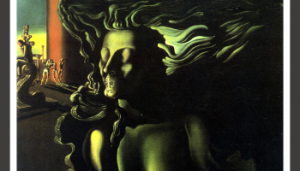 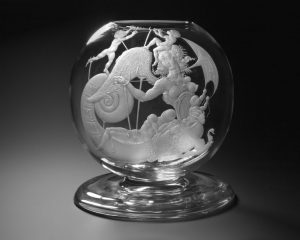 And, of course, Cleveland was the home of the world’s first Dalí Museum, before the Morse Collection permanently relocated to St. Petersburg, Florida. In the picture below, that’s now present Dalí Museum curator/co-director, Joan Kropf, and yours truly, admiring the remarkable Hallucinogenic Toreador.

Now we come to New York – the state and the city – and such cities as Philadelphia, Washington, D.C., and Boston as we eventually head to Florida.

The intriguing oil, Transparent Simulacrum of the Feigned Image hangs in the Albright-Knox Art Museum in my hometown of Buffalo, New York. The University at Buffalo here owns the gorgeous oil, Labyrinth, and the stunning mixed-media painting, Portrait of Kathryn Cornell. 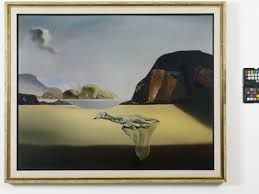 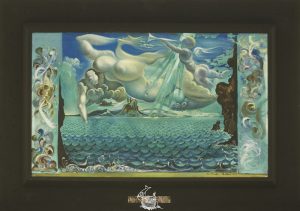 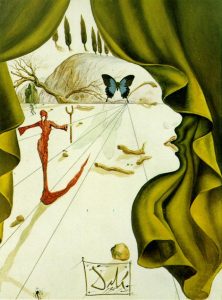 In Utica, at the Munson William Proctor Institute, you’ll encounter Dalí’s Cardinal, Cardinal! And about a three-hour drive east of Buffalo brings you to Syracuse University, which owns three Dalí paintings: Portrait of Colonel Jack Warner, Tree, and Moses and the Pharaoh. 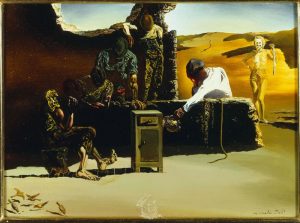 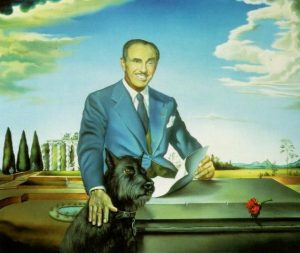 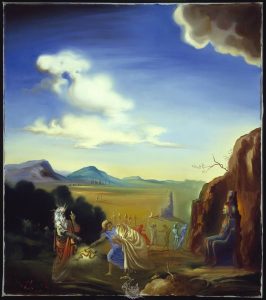 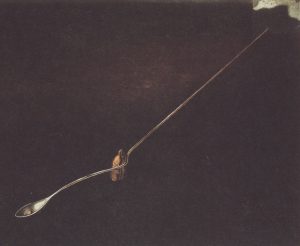 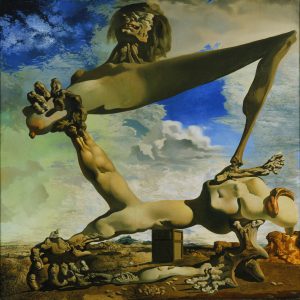 Connecticut’s Wadsworth Atheneum proudly lays claim to a pencil drawing titled Figure Studies, and two mega-hits: Paranoiac Astral Image of 1934 and the outstanding Apparition of Face and Fruit Dish on a Beach, 1938. In the same state, the wonderful oil, Disappearing Cart of 1933 hangs in the Yale University Art Gallery in New Haven. 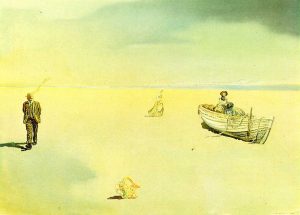 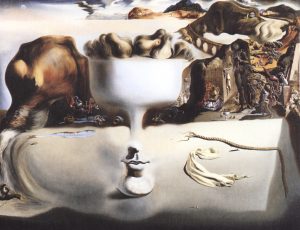 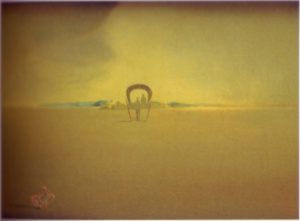 Downstate from Buffalo, meanwhile, we bite into the Big Apple – New York City – which allows a feast of Dalí’s genius, including The Angelus of Gala at the Museum of Modern Art. And, of course, Dalí’s single most universally known work: the iconic Persistence of Memory of 1931. 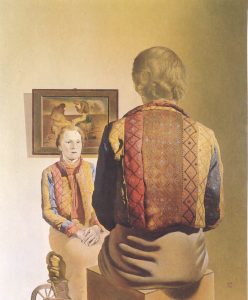 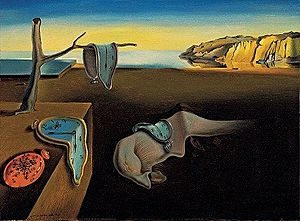 AMERICA IS WHERE ONE FINDS THE MOST FAMOUS PAINTING EVER CREATED BY SALVADOR DALI: THE PERSISTENCE OF MEMORY.

Over at the Metropolitan Museum of Art, we find two large and masterful Dalí’s: The Sistine Madonna (a.k.a., Madonna of the Ear), and the breathtaking Corpus Hypercubus (a.k.a., Crucifixion). 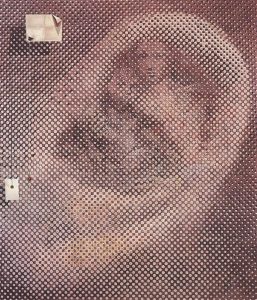 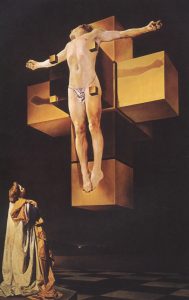 In our nation’s capital of Washington, D.C., three widely divergent Dalí works grace the walls of two museums. The Hirschhorn owns the tremendous oil, The Skull of Zurbaran, while at the National Gallery of Art we can occasionally see Portrait of Chester Dale (not often exhibited) and The Sacrament of the Last Supper – clearly one of the most famous religious paintings ever created. 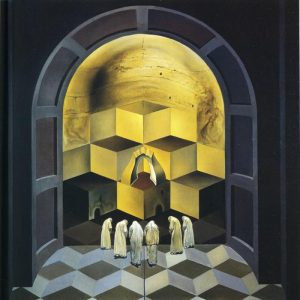 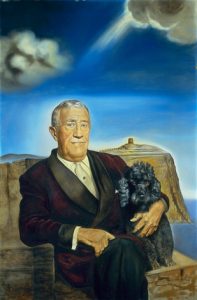 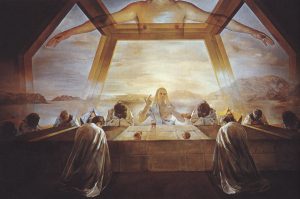 As we’re about to hit Florida, we must first stop at the Birmingham Museum of Art in Alabama to catch Dalí’s two-color 1952 drawing, Madonna Corpusculaire.

And finally, Florida – anagram of which is “For Dalí.” It sure is, thanks to the incomparable Salvador Dalí Museum in St. Petersburg, arguably the single best and most important Dalí collection on the planet. How does 96 oil paintings sound, along with countless watercolors, drawings, prints, sculptures, holograms and more. 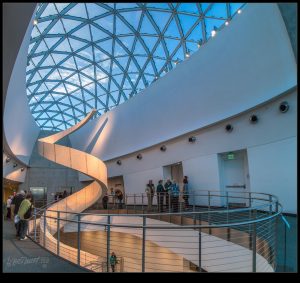 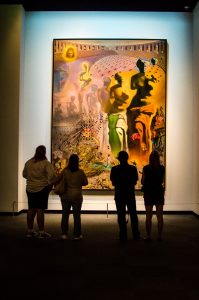 Dalí may have been Spanish, but he was oh so American, too!