Fellow Dalí nuts who know me well know that, for countless years, I lamented and expressed serious frustration over the fact that I was aware Salvador Dalí had appeared on the old Dick Cavett Show, but had never seen a clip of it.  And honestly thought I never would.

What’s more, when I was told Dalí came on Cavett’s set holding an ant eater and that he tossed it onto the lap of actress Lillian Gish, my level of intrigue – and frustration – grew ever more intense. “I must see this appearance of Dalí, if it’s the last thing I do!” I’d insist.

But how? When? Will I ever? Am I hopelessly obsessed?

Many, many years of frustration passed. I could only try to picture in my mind’s eye such eccentric acts of the man whose flamboyant personality and kooky antics were as colorful as the palette with which he painted.

Then, not more than a few months ago, someone pointed out to me (I think it might have been my friend, Elliott King, himself a well-known Dalí specialist), that there was a clip of the Dalí Cavett Show appearance — finally — on youtube. I was elated and quickly went there and played the video. It was truly wonderful to see. Such as it was. But it was only a brief snippet of what was clearly a much lengthier interview. Still, my long-anticipated wish was finally fulfilled, albeit not entirely.

But now, which I ecstatically learned only a day or two ago, the entire interview is online! The Holy Grail! I literally waited decades to find it.  And it didn’t disappoint. Here it is, my friends . . .

But why? Why, for some of us, is seeing Dalí in such contexts so important?

I have a theory that most probably won’t share it. Here goes: some of us want to observe the famously eccentric artist “in action” to determine for ourselves if he was genuinely a bit crazy, or if it was simply a put-on to get noticed and make headlines. Below, check out Dalí on the Ed Sullivan Show, on BBC Radio, and on I’ve Got A Secret . . . 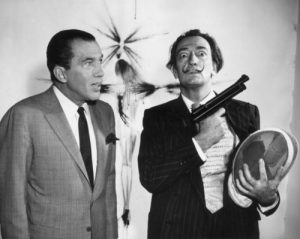 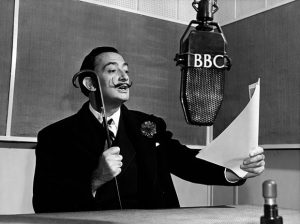 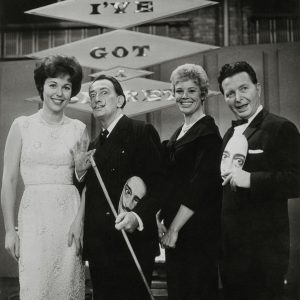 I mean, there have been productive and successful people who were, at the same time, certifiably a little nuts. Was Dalí one of them?

You’d have to watch more than just the Cavett clip to answer that. But, especially for those not particularly familiar with Dalí, it wouldn’t be hard to find Dalí’s appearance on the show not only way out there, but potentially indicative of a man with — let’s be blunt — a major screw loose!

He rambles on about rhinoceroses…the way he always pronounces “butterfly” “booterflyeeeeeee”…how Madame Dalí chooses his clothing but the rest of him is his domain, including his famous mustache, which is “the constant tragic element of my face”…and how that celebrated facial hair becomes melancholic and depressing at night…how he never jokes…and how he doesn’t like children or animals (cats and dogs are vulgar, he declared), but two exceptions are the rhinoceros and the ant eater, which he keeps referring to not as an ant eater, but as an “eat-ant.”

Cavett asks him if he likes baseball, and Dalí says he only looks at photographs of the sport and that, for him, it is all about people “down on the floor, catching dust, creating one tremendous melancholic effect, because everybody’s in this position,” as Dalí leaned over, “in the floor, in the dust.”

When Lillian Gish carefully composes a perfectly sensible and interesting question to Dalí – “Have you, from the beginning of your work, your great craftsmanship in painting, a message to give the people that we perhaps don’t understand?”, Dalí dead-pans a coldly blunt, “No message,” shaking his head. The audience laughs and claps. “Could you invent one?” Cavett interjects, to sort of soften the dissing of Miss Gish’s gently posed query.

Dalí, though, claims he is against any kind of message. And when the host comments that Dalí’s paintings have a dream-like quality to them, Dalí corrects him, noting, “It’s never a dream, it’s hypnogogical images. It’s 10 or 15 minutes before you fall sleeping. Vivid, irrational images, and catch images and paint with a more careful photographic style.”

And speaking of video clips, this one’s a hoot – and demonstrates quite the opposite of the “craziness” observed in the Dick Cavett Show appearance. Indeed, it reveals a down-to-earth charm and wit – not to mention a bit of fancy foot work – as Salvador joyfully treats us to his interpretation the Charleston. It’s nothing less than delightful! Perhaps the most playful footage ever of the controversial and eccentric Master.

Was Dalí a little crazy? Um, yes — like a fox! In fact, a psychiatrist once observed that Dalí had one of the “most ordered” minds of anyone he’d ever examined.

But did Dalí act the part of a crazy man, in part because he was admittedly eccentric but even more so because he knew it would cleverly and irrepressibly help market his art and heighten his fame? Claro que si! (Look it up if you don’t know Spanish).

One thing’s for sure: Dalí was fun to watch on shows like Dick Cavett’s. He had a great sense of humor and a profound love of Charlie Chaplin. And, I think, it showed.