My friend, Elliott King, Ph.D., a Dalí expert, professor, author, and exhibition curator, summed it up nicely: “Dalí was sort of a star’s star.”

So true. Which is why this post focuses on Dalí and celebrity – his, and those celebs with whom he had some connection. By no means is this an exhaustive survey or in-depth study of the topic at hand.

I’ve simply touched upon well-known personalities who played some role in the not so secret life of Salvador Dalí. The take-away is a realization of just how wide the net was cast when it came to this star’s star.

Dalí’s meetings with Coco Chanel inspired him to venture into the world of clothing design. Now a forthcoming new biography of Chanel – Coco Chanel: An Intimate Life – reportedly suggests that Dalí and Chanel had an affair. 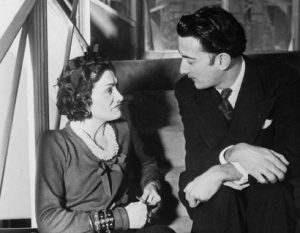 Hmmm. What I know for sure is that the photo here of Salvador and Coco having a cigarette together is really quite surprising, considering Dalí was not a smoker at all (photo notwithstanding) and was in fact a hypochondriac. 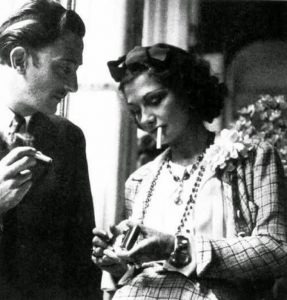 Dalí collaborated with Christian Dior to design costumes for plays, and of course with Alfred Hitchcock in designing the famous dream sequence for Spellbound. 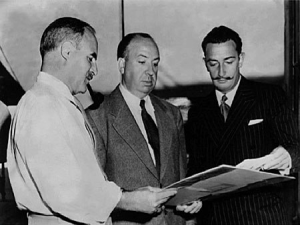 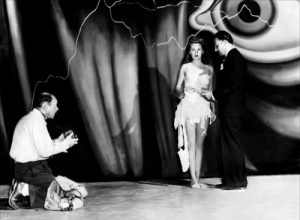 Speaking of cinema, Dalí became good friends with Jack Warner of Warner Bros. Studio, and painted portraits of Warner and his wife Ann. 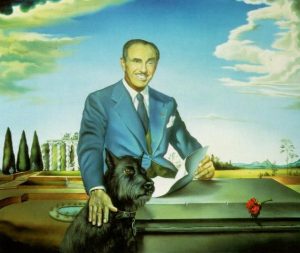 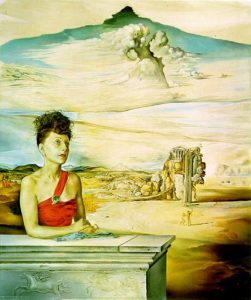 Dalí and Gala’s war time residence at Del Monte Lodge in Pebble Beach, Calif., allowed Dalí easy opportunity to rub shoulders with the movie crowd. Dalí’s Surrealist Night in an Enchanted Forest surrealist party at the Del Monte Lodge in 1941 drew the likes of Jackie Coogan, Bob Hope, and Ginger Rogers, among others. 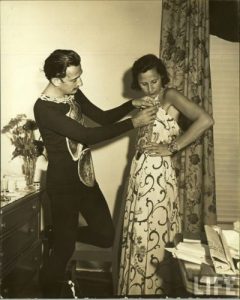 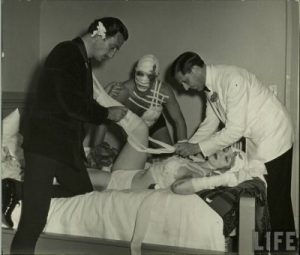 Marie-Helene de Rothschild held her famous Surrealist Ball of Dec. 2, 1972, and the requirement that everyone attending had to come with a surrealist head logically appealed to Dalí. 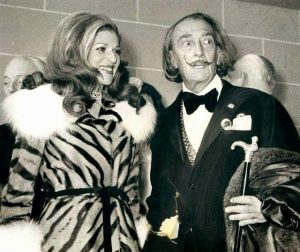 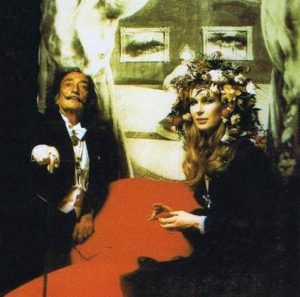 That Rothschild was a member of the super-wealthy Rothschild banking family and Parisian high-society appealed to him, too!

Also along the cinema trail were the likes of Walt Disney, with whom Dalí collaborated on the cinema short, Destino. Harpo Marx and Salvador Dalí became fast friends, and while a film Dalí wrote for the Marx Brothers never saw the light of day, it’s reported that a novel is due out in November that’s an adaptation of Dalí’s Giraffes on Horseback Salad script. 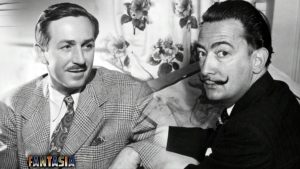 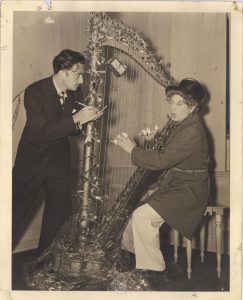 Oh! Back momentarily to fashion to acknowledge the collaboration between Dalí and designer Elsa Schiaparelli – so impressive that it warranted a special exhibition some months back at the St. Pete Dalí Museum. 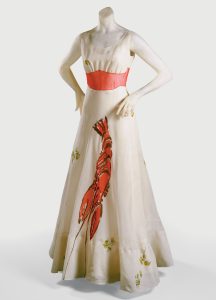 One of Dalí’s idols was the early cinematic genius, Charlie Chaplain. Dalí once explained that he, Dalí, fancied himself as someone who wanted to be both a great painter and “one cloon (clown), like Charlie Chaplain.” 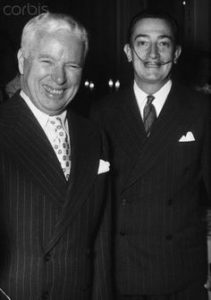 One of the all-time movie and stage greats, Sir Laurence Olivier, had a key role in Dalí’s celebrity when he was the subject of a famous portrait by Dalí of Olivier in the role of Richard III.

Speaking of portraits, Dalí painted an interesting one of cosmetics queen Helena Rubinstein, shown chained to a steep cliff by a string of pearls. Dalí painted a portrait of her prince husband, too. Come to think of it, Dalí did a fine pencil portrait of Harpo – I almost forgot. 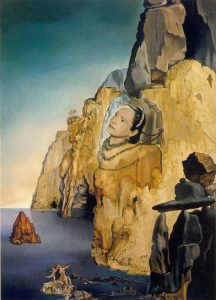 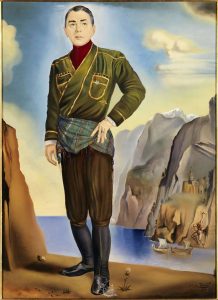 In the quasi-portrait category land two other well-known cinema luminaries – the irrepressible Mae West, whose features inspired Dalí’s Portrait of Mae West, Which Can Be Used as an Apartment, and the iconic Mae West lips sofa. Meanwhile, little Shirley Temple, whose collage head appears in Dalí’s 1939 painting showing her with the body of a sphinx-like lion. On top of that cute little head sits a purple bat. 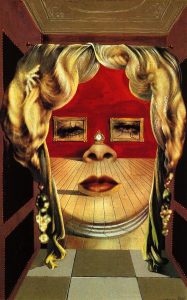 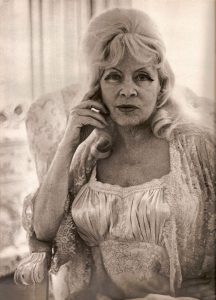 The list of celebs who Dalí knew, and in some cases collaborated with, seems endless: Jackie Gleason (Dalí designed his Lonesome Echo LP cover); Raquel Welsh (Dalí did a splatter-dash “portrait” of her as a promotional stunt to promote the feature film, Fantastic Voyage, for which Dalí also painted a splendid canvas); Marilyn Monroe (the two never met, so far as I know, but Dalí created a wild piece titled Marilyn Monroe, employing the 3-D effects of Rolex and Fresnel lenses); Alice Cooper (he was the subject of one of Dalí’s holograms). 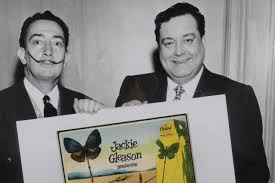 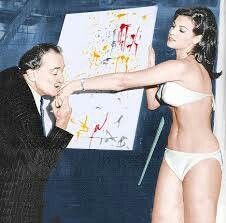 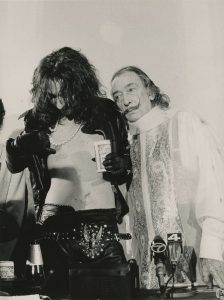 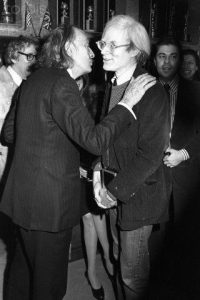 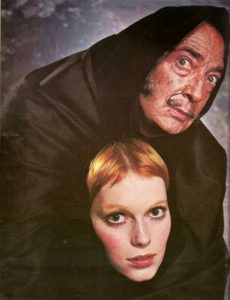 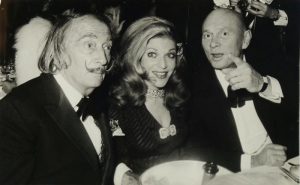 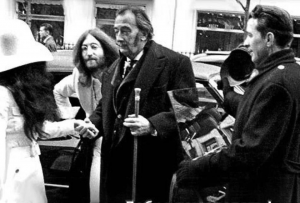 Dalí detested the idea of not being noticed. Fortunately, he never had to worry about that. 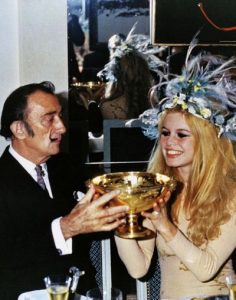 For even if he wasn’t partying with Bridgett Bardot, or seen dining with Gina Lollobrigida, he would forever be noticed for being Salvador Dalí. A star’s star.