Today’s post is going to be a kind of grab-bag of things, consistent with the intrinsic diversity of Salvador Dalí’s art itself. The fact is that the man was so prolific and exhibited such a rich mixture of styles and subjects, it’s really rather difficult to label him as a surrealism master alone.

Dalí did everything! He was a surrealist painter, of course. But his career spanned Cubism, Impressionism, Pointillism, Abstraction, Expressionism, Realism – and even areas beyond realism and beyond the surface of a canvas or print-making matrix, including holography and stereoscopy.

Anyway, as noted, today I want to just briefly touch on a few snippets of the ongoing, always exciting Dalí mystique… 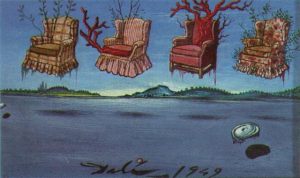 SUSPENDED SEATING… The word “strange” is often attached to most anything created by Salvador Dalí.  And strange can surely characterize works like this one – Four Armchairs in the Sky. What the heck is this all about?  Painted in 1949 while Dalí was in his classic-atomic period, we find four mundane, bourgeois arm chairs hanging above a road, with tree-dotted mountains in the background, and what appears to be a white button hovering just above the ground. Branches – some barren, some fecund with vegetation — sprout from the chairs, lending a living essence to the otherwise unremarkably banal furniture. Strange. 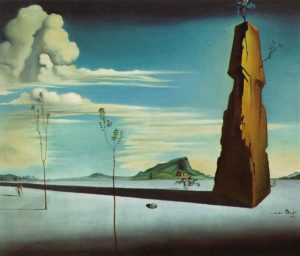 HOLEY GOD … That’s “holey,” not “holy,” for a reason: there’s a hole right through the torso of the androgynous (hermaphroditic?) figure who hovers slightly above the pedestal in this 1944 painting, The God of the Bay of Roses (Virginia Museum of Fine Arts, Richmond, Virginia, USA). Some internet-based information about Roses itself – a municipality on Spain’s Costa Brava – perhaps give us at least a little insight into how the past may have informed Dalí’s more modern work of art:

“This part of the Costa Brava (Bay of Roses) contains other natural spaces, such as Aiguamolls de l’Emporda, with a large number of native species of flora and fauna; the Cap de Creus, in the northern part of the Costa Brava; and the La Albera Mountains, with an interesting collection of megalithic monuments.

“The monuments serve as a starting point for a historic journey along the bay. In the town of L’Escala we find other nearby ruins, those of the ancient Greek and Roman city of Ampurias, one of the most important archaeological sites on the peninsula. Equally outstanding is the Ciutadella de Roses, where you will find the ruins of the city of Rodhes (776 B.C.); the 11th-century monastery of Santa Maria, and Renaissance fortifications; the 7th-century Visigothic Castrum and Trinidad Castle, dating from the 16th century.”

It’s also interesting to note the remarkable similarity between The God of the Bay of Roses and a work Dalí painted three years later: Untitled (Landscape), whose rock formation and its shadow, sky, and ground details are just marginally short of identical to the earlier work. It’s yet another example of “Dalínian continuity,” where Dalí intentionally linked many of his paintings in a kind of cohesive thread.

THE PERSPECTIVE OF FRAMING…I really love to see Dalí paintings not merely reproduced as a four-corner canvas, but shown in context with the frame that holds it. Framing completes a painting. And seeing the work hanging on a wall gives us a sense of scale and, well, a greater sense of realism, if you will. Here’s a nice example of it, courtesy of Getty Images: Dalí’s fabulous 1945 painting, My Wife Nude Contemplating Her Own Flesh becoming Stairs, Three Vertebrae of a Column, Sky and Architecture, being admired by an onlooker. 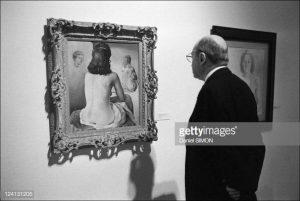 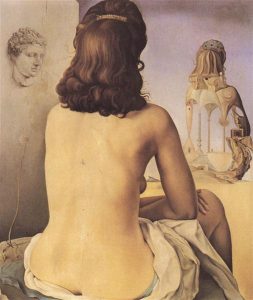 Oh, and I’d say the classic, ornate frame accords beautifully with this stunning work. The black & white image is nicely contrasted here with the color of this exceptionally cool work – one of my all-time favorite Salvador Dalí paintings that brought multiple millions at auction some years back.