Sometimes it seems as if the world couldn’t quite turn on its axis without the influence of Salvador Dalí shining its bright light….somewhere.

Recently, that light made for a most illuminating talk at the Salvador Dalí Museum in St. Petersburg, Florida. Its collection – donated by the late Reynolds and Eleanor Morse, originally of Cleveland, Ohio – is surely the best in the world. Included among the hundreds of Dalí prints, drawings, watercolors, sculptures, holograms and more are nearly 100 oil paintings – including the very first one the Morse’s purchased in the early 1940s: Daddy Longlegs of the Evening…Hope!

And that’s where today’s story begins. Because it was the one painting selected by St. Petersburg artist Steven Kenny to try his hand at copying. And I mean copying precisely, exactly, maybe even neurotically! Right down to a particular tube of blue oil paint manufactured years ago in Barcelona, Spain.

Kenny did a quite wonderful portrait of Dalí in 1993, revealing his typical painstaking technique. 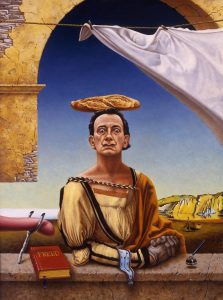 He considers himself a neo-surrealist, but, like Dalí, has not shied away from commercial work, such as his ongoing commission to design eye-catching packaging for Celestial brand tea. He also did four album covers for the rock band, Journey, among other popular musicians.

Just a few days ago Kenny was the featured speaker at the Dalí Museum in St. Pete, explaining through a slide presentation called Duplicating Dalí how he went about copying Daddy Longlegs of the Evening…Hope! It was a fascinating adventure that Kenny originally expected would take maybe three months; in actuality, the ambitious project spanned 19 months.

I think the presentation at the museum was so interesting that, with some revisions, it could make a great PBS television special!

Kenny pointed out how Daddy Longlegs, done in 1940, was Dalí’s first work painted in the United States, and that the Catalan master clearly made sure it was near-perfect. Kenny was in awe, he said, of how Dalí achieved some of the effects in his work, surmising that Dalí wanted this to be a truly magnificent first impression among his new American audience.

For example, in this picture, Kenny uses red lines he describes as “fan-shaped armature that helps move the viewer’s eye across the painting and gives structure to the various elements.” Translation: Dalí was a perfectionist who wanted to achieve perfection. 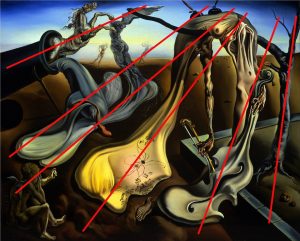 Visual harmony, even if the violoncello is a bit limp.

Not only did the St. Pete artist do a meticulous job in copying the picture itself, but he also constructed a frame to match as precisely as possible the style of wood frame on the original, now nearly 80-year-old Dalí canvas. 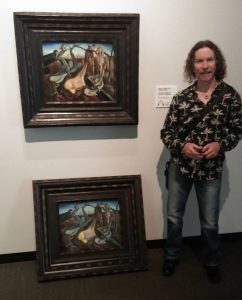 The original Dalí stayed on the wall.

All of this is examined quite wonderfully in the video, seen below.

“He (Dalí) had his issues,” Kenny commented, “but above all, he was probably just a genius with a lot of energy, because he really wore me down trying to copy this.” 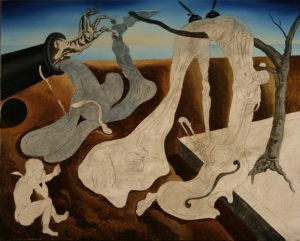 What I find so noteworthy is how Salvador Dalí continues to have such a wide-reaching impact on today’s artists and present-day culture. Whether it’s an outrageous outfit worn by Lady Gaga, or outstanding tattoos that are making body art so compelling today, the influence of Salvador Dalí – the continuing light of his genius – cannot be denied, and shows no signs of dimming in the slightest.