Salvador Dalí had a lifelong love and respect for the Old Masters. He acknowledged their influence in very specific ways, at times, in certain of his works. And he emulated their technique and affinity for craftsmanship in his sharp, careful painting style.

References to great masters such as Leonardo da Vinci, Raphael, Velazquez, Vermeer, and Michelangelo – among others – can be found throughout Dalí’s prodigious career.

One of the earliest is seen in his 1930 oil on canvas, Imperial Monument to the Child-Woman. Direct your gaze to just below the center of the canvas and you’ll find a rendition of Leonardo’s iconic masterpiece, The Mona Lisa.

And as I’d pointed out in a recent blog post, Dalí quoted the pointing angel from Leonardo’s Virgin of the Rocks in his 1952 painting, Anti-Protonic Assumption. Both of these Dalí’s were relatively early works when we take the long measure of the artist’s astonishingly productive catalog. 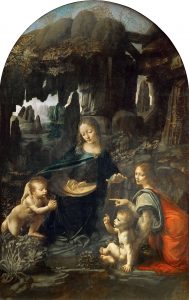 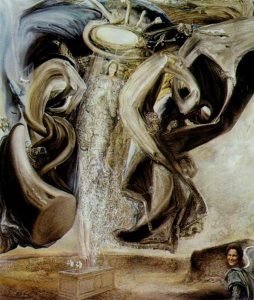 But the very last works by Salvador Dalí punctuated a period that was by no means devoid of his appreciation of these masterful precursors. One work in particular is truly surprising, because it combines a nod to one of the most famous works of art of all time – the statue of David by Michelangelo – with Dalí’s penchant for hidden/double imagery.

I’m talking about Landscape with Hidden Image of Michelangelo’s David, completed in 1982. Dalí literally turned our vantage point on its head, cleverly camouflaging a full-length image of David within the rocky landscape – readily discerned with a 180-degree turn of the picture. 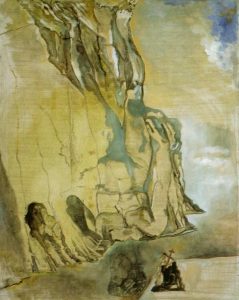 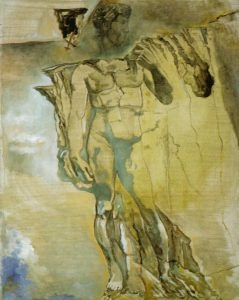 I cannot think of any other Dalí work – be it a painting, drawing, print, etc. – where this “upside down” device was employed.

Increasingly, as more focused attention is given to Salvador Dalí’s serious work at the easel, we’re seeing the strong connection between him and the great old masters.

Indeed, two distinguished art historians and authors – Dr. Christopher Heath Brown and Jean-Pierre Isbouts – are putting the finishing touches on a substantial book that delves into this very subject – the connection between the art of the Old Masters and the art of the 20th century master, Salvador Dalí.

Watch this space, brought to you exclusively by The Salvador Dalí Society®, Inc.©, for further information on Mssrs. Isbouts and Brown’s forthcoming book.