Salvador Dalí, architect. Come again? Architecture is clearly not a profession we associate with the master of the melting watch, the curator of crutches, the guru of giraffes on fire.

But if you think about it, Dalí’s thoughts and talents were never really very far from the form and function of architecture.

Consider how it all began. Young Dalí fell in love with Cadaques when his Figueres-based family would take vacations there. The spectacular Mediterranean light and the extraordinary rock formations that would become hugely inspirational to his special brand of surrealism, seduced Salvador relentlessly.

In 1930, Dalí and Gala bought a small fisherman’s cabin in Port Lligat, and eventually turned the ramshackle structure into a sprawling villa that is an architectural labyrinth of unparalleled distinction.

It is, today, considered a museum – part of the so-called Dalí Triangle, comprising the villa at Port Lligat, the museum in Figueres, and the Pubol castle.

Now consider that, throughout Dalí’s surrealist paintings, drawings, watercolors, prints and sculpture, we find the influence of the one-of-a-kind Barcelona architect, Gaudi, whom Dalí deeply admired. The undulations, color, and pure surrealist invention of Gaudi – completely radical and forever without parallel – had a profound influence on Dalí’s pictorial representations of both the real and the unreal. 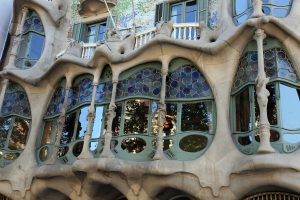 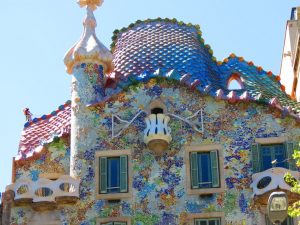 Dalí played architect again when his super-surrealist Dream of Venus pavilion at the 1939 World’ Fair in New York created quite a sensation. 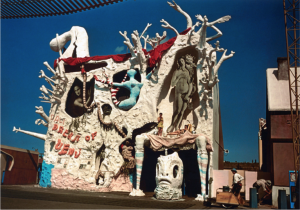 And then there was the ill-fated, utterly Dalínian craziness of the Dalí Noche nightclub Dalí was commissioned to design in Acapulco, Mexico. The project was never realized, leaving Dalí’s wild imagination on the cutting room beach, as it were: a huge sea urchin shell supported by tall spider legs, with giraffes attached for good measure! 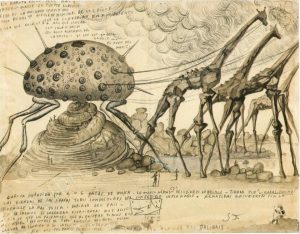 The apogee of Dalí’s ventures in architecture was embodied in his Teatro-Museo Dalí – commonly known as the Dalí Museum – located in Figueres, Spain, the small town where Dalí was born. Under the maestro’s direction, the town’s theatre was remarkably transformed into what is now one of the world’s most impressive and insanely bizarre attractions.

An architectural highlight of the Teatro-Museo Dalí is the geodesic dome on top, created by architect Emilio Pinero. 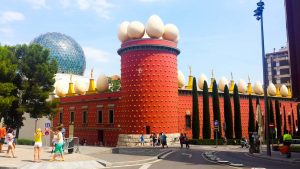 Finally, when Dalí wasn’t at his villa in Port Lligat, he stayed at two homes-away-from-home that were nothing short of resplendent: the historic Hotel Meurice in Paris, and the opulent St. Regis Hotel in New York.

Salvador Dalí turned a run-down fisherman’s cabin into a spacious villa of stunning distinction. He transformed an old Spanish theater – bombed during Spain’s civil war – into an enormously popular museum that in itself is a marvel of Surrealism and pop culture.

It all reminds us that pretty much anything Salvador Dalí got his creative hands on was destined for something unforgettable.

(Images used under Fair  Use provisions for journalistic purposes only.)