The Stendhal Syndrome is a curious and interesting phenomenon, whereby people are brought to a state of dizziness and sometimes even loss of consciousness in the presence of great art.

Scientists don’t quite know why this happens, but when it comes to the art of Salvador Dalí, I have some thoughts on the subject; that is, on Stendhal and Dalí.

I remember, back in 1972, visiting the original Dalí Museum in Beachwood, Ohio, and probably experiencing at least some of the Stendhal effect while standing in awe before the three immense, powerfully evocative masterworks there: Discovery of America by Christopher Columbus, The Ecumenical Council, and Hallucinogenic Toreador (all three now in the Salvador Dalí Museum in St. Petersburg, Florida, U.S.A.). 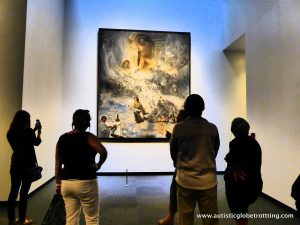 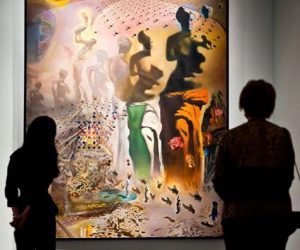 Seeing such artistic genius for the first time in person can be overwhelming. It literally brought me to my knees as I held my arms up in a gesture of adulation. Others around me surely must have thought I was crazy – or at least a fanatic! (When I met Dalí for the first time in 1973, I told him I was a “fanatic admirer,” and he repeated that description with delightful satisfaction and in a French accent, nodding his head: “Ahhh,” he replied approvingly, “fanatique admirer!”).

But there is a sort of additional dimension to this Stendhal thing, at least for me, and it pertains specifically to the almost unbelievable realism Dalí was so skilled at achieving. Today, for example, I was leafing through the big Philadelphia Museum of Art Dalí catalog issued for the great centennial exhibition there in 2005, and stopped at page 370.

It’s a full-bleed reproduction of a detail of Dalí’s magnificent 1954 masterpiece, Corpus Hypercubus. 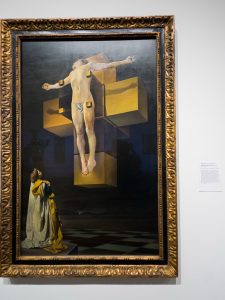 As many times as I’ve seen that work – mostly in reproductions, but several times in the flesh – I was again rendered almost dizzy by the magical realism Dalí achieved in this painting.

The detail in the catalog shows a large presentation of the image of Gala; the handling of her gold satin garments is nothing short of breathtaking. I believe it to be as good as the Old Masters. 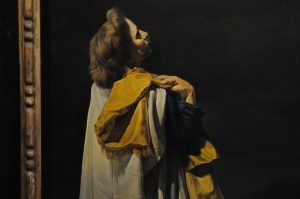 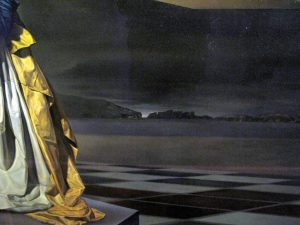 As I studied the catalog page with an unceasing sense of admiration, I then focused on the upper right corner of the page, which shows an extreme close-up of the lower leg area and feet of the unconventionally crucified Christ. From the reflection of the polished toe nails to the veins and muscles beneath the skin, it is again a sight of magnificent realism that – even in a catalog reproduction – nearly puts me in a Stendhal Syndrome-like trance. 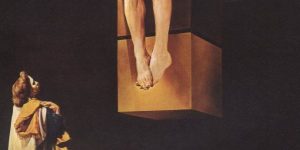 I experienced a similar almost dizzying sense of awe when I first saw Santiago El Grande in person at the Dalí: The Late Work exhibition in 2010-2011 at the High Museum of Art in Atlanta, Georgia, U.S.A. 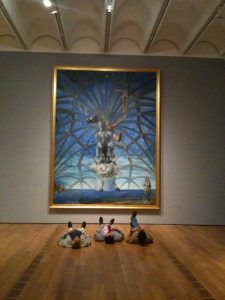 What makes it all the more intriguing for me is that so many people still find it astonishing that such Renaissance-like mastery came from such a surrealist “mad-man.” That the same artist who gave us floppy watches, floppy phalluses, and paintings of great masturbators, also gave us monumental beauty in paintings – and, yes, in drawings, watercolors, prints and sculpture, too.

Beauty that can, alas, sometimes bring us to our knees.