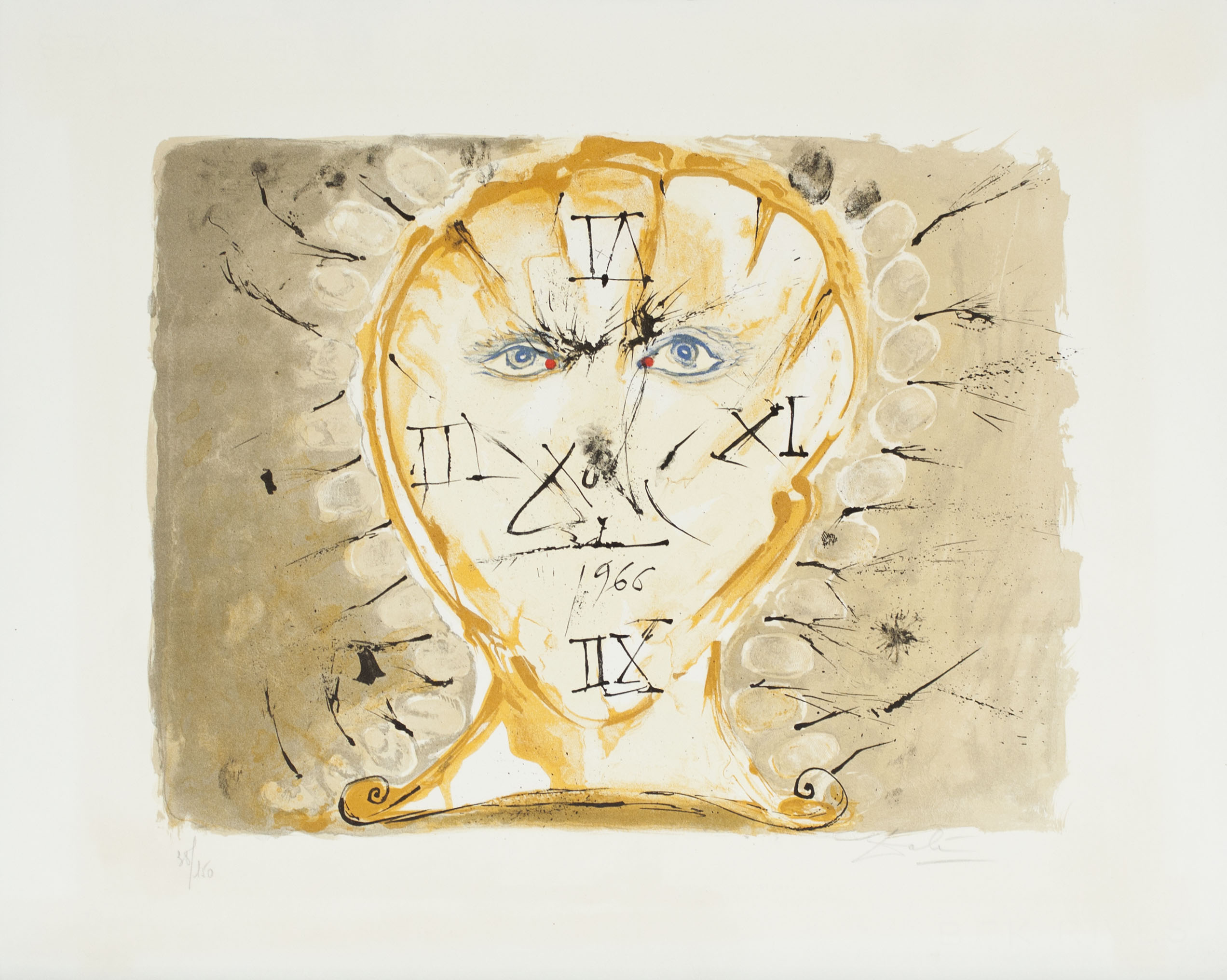 By Paul Chimera
Dalí Historian
(Mr. Chimera worked directly with Dalí Museum founder Reynolds Morse, as the publicity director of the original Dalí Museum when it was located in Beachwood, Ohio)

It was completely natural and understandable that Salvador Dalí would be interested in the subject of the ancient phenomenon of the sun dial. Ok, it’s coincidence (right?) that “dial” is an anagram of “Dalí!” But, of course, time pieces of a more modern incarnation – watches and clocks – were as integral and central to Dalí’s symbolic work as his mustache was to his public persona! In Dalí’s case, those time pieces generally oozed with the gooiness of Camembert cheese left to run in the Mediterranean sun.

In his unique print, “Self-Portrait Sun Dial,” Dalí puts himself squarely on the dial of the device, not so much in a manner meant to capture a literal likeness, but more as a metaphor for how Dalí was so well known for his interpretation of time’s meaning within his surrealist world. It may be significant to note that, just as Dalí’s soft watches could not properly function in so wilted a state, so too is his sun dial wall sculpture in Paris said to not actually be constructed to tell accurate time!

The same year Dalí created this striking print, he designed a very similar image, intended as a sun dial and cast in cement, which hangs over the street, like a shop sign, in Paris. It appears on the outside wall above a bakery that used to be known as PainsDelices, and today is the Bagel Place café on Rue Saint Jacques.

In 1966, while a brass band from the Beaux-Arts played, Dalí unveiled this gift to the city of Paris. He drew upon it during the ceremony, after being hoisted up by an industrial “bucket” lift, accompanied by his manager, Peter Moore, and Dalí’s pet ocelot.

It was not mere happenstance that Dalí’s sun-dial was ensconced above Rue Saint Jacques. The sun dial’s scallop-shaped face – just as in this print – symbolizes the throngs of pilgrims who in ancient times traveled Rue Saint Jacques on their journey to Santiago de Compostela in Spain. The flames Dalí shows us above the eyebrows symbolize the intense sun endured by those who made the Santiago de Compostela pilgrimage.

Though the image in “Self-Portrait Sun Dial” may not truly resemble Dalí’s face, it could be noted that at least the suggestion of Dalí’s famous mustache is implied by the top part of the “D” in Dalí’s signature, and the dot over the “I”. What is clear, however, is that this print is among the rare few that claim self-portrait status, and strikes at the core of Dalí’s irrepressibly Spanish heritage.