February always vibrates with the buzz of what’s coming up at the big auction houses later in the month. This time there’s excitement in the air – certainly for me, and I suspect for quite a few others – over an Untitled 1932 Salvador Dalí oil painting of rather small dimensions (9-3/8 inches x 6-1/2 inches).

The work has reportedly been in a private collection in Greece for some 75 years, considered a real rarity, since the vast majority of Dalí’s paintings from the all-important decade of the 1930s are in museum collections.

This little morsel of succulent Surrealism speaks volumes in its simplicity. For me, the first impression is one of that enigmatic wonder Dalí was such a master at engendering in us. What, we ask, is this picture about? What are we seeing? What is going on? What aren’t we seeing? 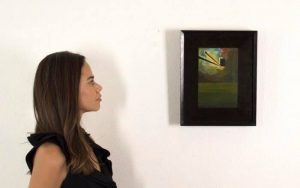 Against a strange, mysterious wall – barren and beaten, but also detailed in a large area of blue and green hues – we see a window into an eerily dark room, out of which a curious and unidentifiable red post emerges. It has alternatively been figured to be a flag pole or a boat mast – yet who can say if either suggestion is accurate, especially given the dreamlike, enigmatic context here? In any case, it lends a deep three-dimensional look to the picture.

The hint of partly cracked brick behind the plaster is a typical Dalí motif and injects a sense of dilapidation and desolation to the overall impression the canvas exudes.

One can easily see the window and general structure, such as it is, as perhaps a kind of surrealist view of Dalí and Gala’s own modest villa at Port Lligat, which, at the time this work was painted, wasn’t much beyond an anemic barracks that was destined for extensive expansion in the coming years.

This Untitled work invites comparison with a host of other Dalí paintings from the 1930s, including The Invisible Man, The Meeting of the Illusion and the Arrested Moment – Fried Eggs Presented in a Spoon, Masochistic Instrument, Morning Ossification of the Cypress, Untitled (Dreams on the Beach), and Morphological Echo. 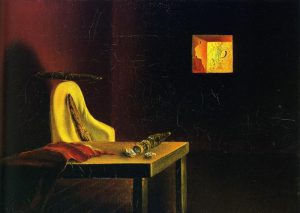 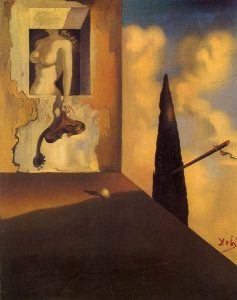 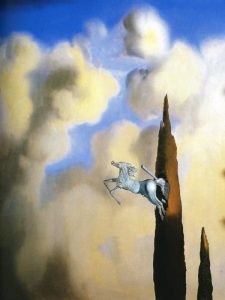 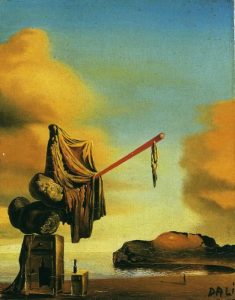 While there are no fried eggs, melting watches, crutches, ants, flies, or burning giraffes in this Untitled 1932 painting, it’s the kind of Salvador Dalí painting collectors love – and part with megabucks for. It has that uniquely Dalíesque look and feel to it. It’s surrealistic. It’s enigmatic. It’s mysterious. It’s wonderfully executed. And its provenance is considered irrefutable.

It’s my hunch that the estimate of the price Untitled will bring at auction a few days from now is too low. While it’s true that it’s a small painting — and larger ones tend to fetch more — in this case I predict this little Salvador Dalí will bring an unexpectedly large price tag at Christie’s. We shall see.