A large Salvador Dalí painting (done in four adjoining sections) often overlooked when considering the wall-size works of the Surrealist master is his 1939 “Dream of Venus.”

Thirty-five-year-old Dalí created this picture – chockablock with iconic Dalínian images and symbolism – expressly as a backdrop inside his trippy and controversial Dream of Venus pavilion at the 1939 World’s Fair in New York City.

Dalí was one smart surrealist! He knew how vital this high-visibility project would be to his quest to bring Surrealism to the masses. And a little dash of controversy didn’t hurt.

Dalí’s originally proposed entrance-way to his fantastic pavilion was to feature his reassignment of a fish’s head on the famous figure of Venus from Botticelli’s well-known painting, “Birth of Venus” (1482). But World’s Fair officials rejected the idea, claiming it was too outrageous.

Furious, Dalí published a manifesto, protesting the fair authorities’ decision. It was titled, “Declaration of the Independence of the Imagination and the Rights of Man to His Own Madness.” The cover featured Dalí’s sketch of the fish-head Venus he’d envisioned for his pavilion. 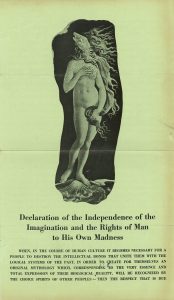 This document and the conviction behind it – coupled with Dalí’s exoneration by a court magistrate, after he’d been detained the same year for smashing through the Bonwit Teller store window after protesting a rearrangement of his window display without his permission – helped catapult the artist into high regard for his sense of authenticity and defense of creative license.

Speaking of imagination, Dalí’s “Dream of Venus” 4-panel painting is, as noted, a painting seemingly forgotten about when one considers large-scale Dalí works, and his most famous painting, “The Persistence of Memory” in particular.

Here we have a huge re-interpretation of “Persistence of Memory,” eight years after that small jeweled masterpiece was created. Ironically, many people who’ve seen reproductions of the original 1931 canvas assume it’s large; it’s actually about the size of a laptop computer screen!

Eight years later, Dalí painted the multi-panel version, remaining faithful to the composition of “Persistence,” but now on a gigantic scale – and with several added elements, including a burning giraffe and a figure with drawers, sporting a lobster hat. 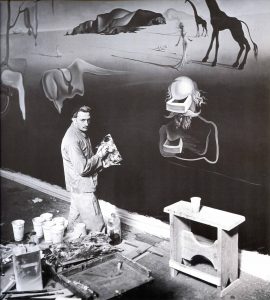 The pavilion – an undersea grotto – featured a provocative array of partially nude women (mermaids) and a mélange of curious props that made for a sexy surreal experience. It had to be the most exotic and “naughtiest” pavilion at the ’39 World’s Fair!

Dalí’s own lifelong dream was to fulfill a promise he’d made to his mother, who died when he was just 16: he would become not only a successful artist, but the most famous one in the world. Three years before his World’s Fair sensation, he landed on the cover of TIME magazine – about as quintessential a symbol of success as one could hope for.

And, on the cusp of the 1940s – where Dalí spent most of the decade in the United States during World War II – he was about to be deluged with numerous commissions, from society portraits to endless commercial projects. Salvador Dalí was well on his way to fulfilling the pledge to his mother, and then some!