So today I’m focusing on a peculiar work from 1929: The Sacred Heart of Christ, which features this outrageous statement by Dalí: Sometimes I spit on the portrait of my mother for the fun of it. 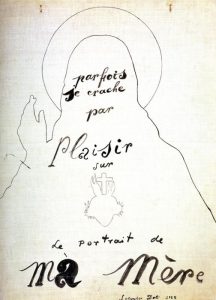 It’s never been a favorite of mine. And it is most decidedly not to be confused with Dalí’s The Sacred Heart of Jesus of 1962. 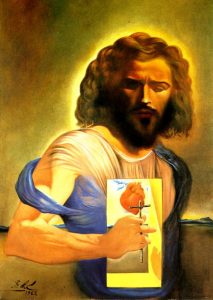 Nothing shocking in this one by Dalí.

The work was done entirely in black, though the medium and dimensions are unknown. The image is blasphemous, what with the contour of Christ with halo and blessing hand, along with the sacred heart and Crucifix – inside of which is the scandalizing statement that further solidified the estrangement between Dalí and his father. And it surely didn’t win Salvador (which means “savior”) any points with the Christian community.

Of course, about nine years earlier, Dalí’s mother died of ovarian cancer; it was an unimaginable blow to the master of imagination in the making. And, of course, it made Dalí’s statement on canvas all the more shocking.

Therein lies the main point, I think: to shock.

To make it clear from early on that Salvador Dalí was not afraid to wear his nonconformity, his iconoclasm on his sleeve. It’s further testament to Dalí being a true surrealist, a man who not only painted surrealistically, but lived surrealistically.

The aim of Surrealism, in part, was just that – to shock. To tip societal norms on their collective ear. To shake things up. Zero restraints. Dalí’s sacrilegious work here sure accomplished that!

Why did Dalí do it?

One theory is that he wanted to piss off his father and his sister, Ana Maria. This was a time when neither his father nor his sibling were exactly enamored of Gala. That’s an understatement. This work, then, was surely something of a retaliatory salvo. It worked, because it generated a seismic uproar in the family.

But we must not overlook another possible phenomenon. There may in fact have been times when Dalí actually felt what he expressed in the painting! That, in itself, may sound shocking. Yet at times most all of us have inexplicable, confessional feelings that leave us nonplussed and conflicted. And not a little guilt-ridden, to boot.

What could be more repulsive and shocking to the conscience than asserting you want to spit on a portrait of the person who gave you birth – and just for the fun of it!

When people say the world of Salvador Dalí was not exactly a tidy place, this picture is one example of just what they meant.

Fortunately, Salvador Dalí was a man of myriad faces and moods. For every icky bit of spine tingling and eye-rolling his art may have caused, there were other works that were inarguably beautiful.

I believe The Sacred Heart of Christ hangs in the Musee d’Art Moderne in Paris. Somewhat untypical of Dalí’s style, highly consistent with his individuality. No, it’s not a favorite of mine. But I’ll never stop admiring how Dalí remained true to himself, no matter what he took on.