“The Temptation of St. Anthony” is easily one of the most widely reproduced and well-known of the masterful oil paintings by the king of Surrealism, Salvador Dalí. Ironically, it came into being as a result of an artists’ competition among U.S. and European artists – and went on to become one of Dalí’s most superb and compelling masterpieces. 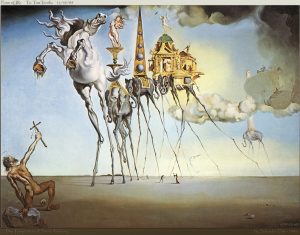 Dalí painted this 34 inch x 47 inch canvas in response to a contest promoted by a film production company in 1946. Artists were to depict their vision of the temptation of St. Anthony, which would be used in the movie, “The Private Affairs of Bel Ami.”

Ironically, the winning painting – a work created by the well-known Surrealist painter Max Ernst – is one virtually no one seems to have remembered, while Dalí’s “losing” entry has endured as one of the, well, coolest surrealist paintings ever.

The title of the painting pretty well tells us what we’re seeing: the naked ascetic visually seduced by visions of desire and lust, as a cavalcade of temptations approaches – including a rearing horse whose hooves look like they’re about to descend right upon St. Anthony, who finds solace and safety in the rock on which he steadies himself. The crucifix he thrusts before the monstrous herd is intended to exorcise the demonic vision.

The march of temptations includes naked women – one inside an ornate palace – while five elephants on skyscraper-tall spidery legs give the impression of weightlessness and a result of the impossible weight they bear, including the one at rear, on whose back sits an enormous brick tower that rises up through a cloud on which a glimpse of the El Escorial can be seen – the castle-monastery of King Philip II of Spain. This structure, for Dalí, “symbolized divine order’s power over earthly temptations,” according to the catalog of the great Dalí retrospective held in 2005 at the Philadelphia Museum of Art, Philadelphia, Pennsylvania. 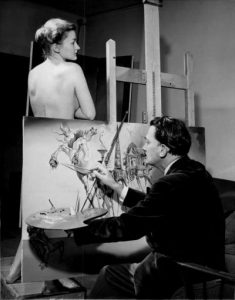 A master paints a masterpiece.

Meanwhile, there is no question the pachyderm with the Egyptian obelisk on its back owes to the sculpture by Gian Lorenzo Bernini, erected in 1667 on the Piazza della Minerva in Rome, Italy. Dalí and Gala traveled in Italy during the Spanish Civil War and definitely saw this monument.

“The Temptation of St. Anthony” features a wonderful sense of movement, from the elephant bringing up the rear, though the progression of each animal, which gets larger and larger as they end in the terrifying rearing steed, whose front legs are anatomically correct while its rear ones echo the stork-like legs of the accompanying pack.

It is, in my view those outrageous legs that literally elevate this painting to the status it’s accorded among Dalí enthusiasts. Many have told me it’s among their favorites, and it’s the remarkable sense of levitation with which the stork-like legs infuse the scene. This is made all the more apparent when the immense march of the animals is contrasted with the three dwarfed human figures who appear in the barren landscape below.

Footnote: It’s regrettable that they picked Ernst’s painting for that 1947 movie drama, starring George Sanders and Angela Lansbury. The 8-second close-up of the canvas – admittedly a very fine work – was the only color segment in the black & white film. So many of us wish they’d chosen the Dalí.