The issue of whether size matters is on the radar again, thanks to an interesting photo I’ve recently come across. It shows a variation of Dalí’s most famous painting, The Persistence of Memory, but much, much larger (artist unknown). 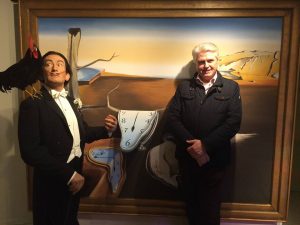 Ironically, many people who’ve seen reproductions of Persistence but aren’t especially familiar with its actual size, assume the canvas is far larger than its diminutive 9.4” x 12.9” dimensions. 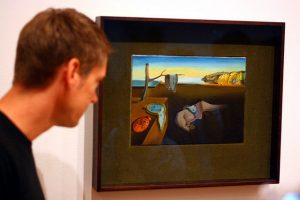 Indeed, the large presentation shown in this photograph is more in line with the size many presume the original to be. That said, it’s fun to imagine Persistence of Memory in these larger dimensions, isn’t it! 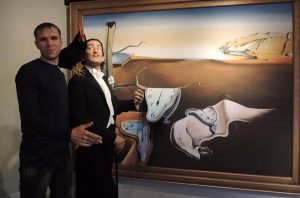 Now let’s turn our attention to Dalí’s 1933 oil on canvas, Portrait of Gala with Two Lamb Chops Balanced on Her Shoulder. 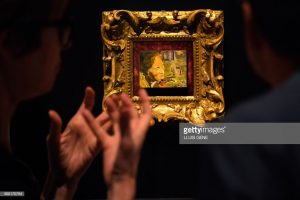 Much smaller than most of us ever knew.

The work was featured in a recent exhibition in Barcelona devoted to Gala Dalí, and even many Dalí aficionados and scholars were not aware of just how tiny the picture is. The photo of it here makes it quite clear just how brilliant a miniature Dalí painting can be – all 2.3 x 3.1 inches of it!

The size issue also has a flip side. Dalí’s stereoscopic work, The Chair, is usually shown out of its display space at the Teatro-Museu Dalí in Figueres, Spain. As a result, I for one always imagined its size to be more or less similar to probably Dalí’s most accomplished stereoscopic work, Dalí from the Back Painting Gala from the Back Eternalized by Six Virtual Corneas Provisionally Reflected in Six Real Mirrors (unfinished) of 1972-1973. 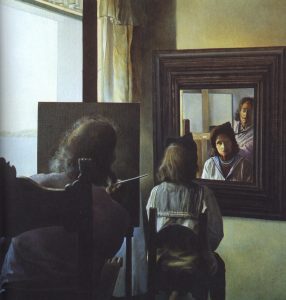 In fact, as you can plainly see in the photo here, Dalí’s The Chair is immense. 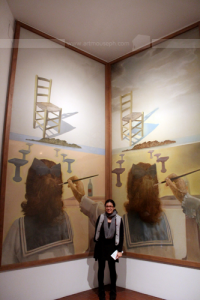 Immense characterizes many of Salvador Dalí’s most famous works: Santiago El Grande, Discover of America by Christopher Columbus, The Battle of Tetuan, Tuna Fishing, and many others. Not to be outdone, Dalí’s miniature paintings also occupy unforgettable importance in his prodigious oeuvre – works such as The Weaning of Furniture Nutrition, The Ghost of Vermeer of Delft, Which Can be Used as Table, Portrait of Gala, The Specter of Sex Appeal, and countless others.

Dalí worked in every size, in every medium, in every style. Whether such a giant of an artistic phenomenon’s most famous work – the tiny Persistence of Memory – is of any special significance is anyone’s guess.

But one thing’s for certain: one of the smallest paintings of the 20th century is also one of the most famous. In the last century, and in the history of art.