Some believe “Tuna Fishing” is Salvador Dalí’s greatest painting. They may be right.

Of course, it’s just an opinion. But you’d get little argument from this blogger and many others.

“Tuna Fishing” (1967-’68) is so many things. First, it may be the most colorful painting Dalí ever created, though rivaled by “The Hallucinogenic Toreador” and some others. But you’d be hard-pressed to find a more dazzlingly colorful canvas than this large 12 ft. x 14 ft. masterwork (owned by the Paul Ricard Foundation off the coast of France). 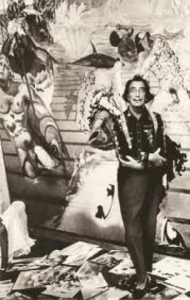 There’s much more. It was rare that Dalí didn’t pay tribute to great artists before him when he painted these monumental masterworks, most of which took at least a year to complete. In some of the background details we see Dalí’s nod to “Raft of the Medusa,” by Gericault — a large painting in the Louvre in Paris, that Dalí long admired.

At right and bottom center, Pop art is reflected in the large male figure whose body is composed of a colorful Cubistic mosaic, while the muscle-shirted figure is painted in posterization style that was popular at the time in graphic design.

Dalí salutes his love of Greek classicism in the sculpture-like depiction of Alexander the Great, at left, whose arm restrains a tuna in which a spear is being violently plunged.

Of special interest to me is the handling of the cobalt-blue water in the lower left. It’s as if you could touch it and discover your hand is soaked! This precision makes most any Dalí art come alive with authenticity and that sense of wonder we experience when confronting Dalí’s surrealism.

What Dalí was never afraid of was honesty and candor, even if it might offend some. Unabashed frontal male nudity is seen to the right of the bloodied tuna at the painting’s center, while the brilliant gold gleam of the knife piercing the fish is the focal point that is almost blinding in intensity.

Conspicuous in their absence, perhaps, are any images of Dalí and Gala themselves. And there’s nary a soft watch to be found. But those who believe “Tuna Fishing” may be Salvador Dalí’s single greatest painting may hold a well-anchored position.