Much has been written about the rocky relationship between Salvador Dalí and his father. The senior Dalí disowned his son – and the feeling was mutual – when Salvador brought Gala into the picture. It also didn’t help that the young artist’s irreverent personal and artistic tendencies further drove a wedge between him and his strident notary father (happily, there was an eventual reconciliation).

Nevertheless, Dalí painted a number of portraits of his father. They depicted an imposing figure, inseparable from his smoking pipe and, in Dalí’s view, from a harsh reputation that preceded him. 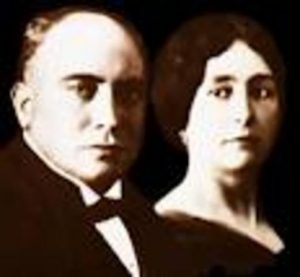 By contrast – though he adored his mother, who greatly doted on her future artist son – there are only two significant portraits of her of which I’m aware. Of course, fate intervened when Dalí was just 17, taking away his beloved 47-year-old mother on February 6, 1921, after she was struck with uterine cancer. There wasn’t much of a window of opportunity for Dalí to paint her. 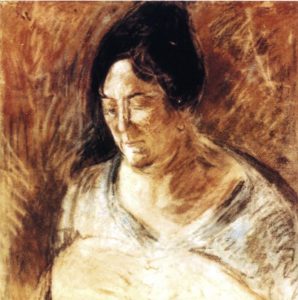 Importantly, Dalí wrote in his autobiography, The Secret Life of Salvador Dalí, that the death of his mother was the greatest blow in his young life: “With my teeth clenched with weeping, I swore to myself that I would snatch my mother from death and destiny with the swords of light that someday would savagely gleam around my glorious name!” (A great example, here, of Dalí’s extraordinary artistry with words as well as with a paint brush.)

Gibson noted, “Dalí’s ten-page diary entry for October 1921 confirms that, once he assimilated the shock of his mother’s death, he did indeed get to work with renewed vigor on the construction of his public image and of his fame.”

The two portraits here of the artist’s mother are solemn depictions of her. No background distractions, no sense of joy. Just honest likenesses of an enormously important woman in young Dalí’s life, whose untimely death motivated him to fulfill a promise he made to her that he would become a world-famous artist. A promise he made good on.

Both Dalí and his mother are surely proud to this day.