As a Dalí historian, blogger, collector, and die-hard aficionado, I confess I don’t focus nearly enough on Salvador Dalí’s early art – the very first works he created as a teenager and even younger.

Of course, it’s easy to get distracted from such a focus, given the immensely seductive allure of his 1930s surrealist pictures and the tremendously powerful paintings, prints, drawings and works in other mediums that followed.

Yet some of the most interesting, charming, and insightful works by Dalí were done when he was barely driving age (Dalí never drove a car in his life). His art at that time took us down a special road – one that allowed us a glimpse into what was on the mind of the young artist whose future would be marked by greatness, fortune, and the fame he craved.

One truly wonderful work – c.1921 gouache on board, about 12 inches by 20 inches, collection Fundacio Gala-Salvador Dalí – is The Voyeur. 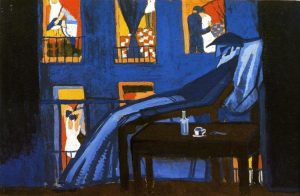 From a purely esthetic point of view, Dalí, at age 17, did a masterful job of capturing a sense of an evening’s darkness, with the warm, sensual glow of the lighted rooms into which the reclining man can peer with impunity. And, of course, so can we.

The blue and black and orange palette lends itself ideally to the theme of this subtly sexy work. We get to secretly watch as a woman puts on, or takes off, her stockings; a couple embracing; a slip-clad girl disrobing. It seems perfectly consistent with the natural and normal preoccupations of a post-pubescent boy.

Of course, the voyeur in Dalí’s picture is far from young; he’s in fact a bearded old man, slumped in his chair, seemingly – paradoxically – oblivious to the after-dark window display he could be voyeuristically enjoying.

On the table next to him is a cup and spoon, suggesting coffee or tea, while the bottle implies a far more potent beverage.

Perhaps the idea Salvador was trying to convey is that the voyeur – to be “successful” (i.e., assured of not being unmasked) – must fade into the cover of night. Thus, the man adopts a kind of protective inconspicuousness.

Or maybe Dalí was suggesting that the man already had his fill of being a peeping tom, and now it’s our turn, as he slinks down to rest after a night of satisfying voyeuristic fantasy.

[Image gratefully used under Fair Use provisions for journalistic purposes only]