I sense there’s a tendency among Dalí aficionados to focus only on the artist’s works up to 1970, the year he painted his last truly great and inspired masterpiece, The Hallucinogenic Toreador of 1970 (Salvador Dalí Museum, St. Petersburg, Florida). Dalí’s post-1970 pictures – those works he still managed to produce during his increasingly tenuous physical and mental health – are, I fear, often overlooked.

If my hunch is correct, why is that?

I think a big reason is that this body of work has not been widely reproduced in books, much less examined to any serious degree. What’s more, they’re admittedly lacking in the sharp and precise detail, and vibrant color palette, that typified and added to the appeal of Dalí’s earlier works.

But there are exceptions. And I’ll be spotlighting some of them in future blog posts.

I want today to consider a 1974 oil titled The Wounded Soft Watch. While so many of Dalí’s works of the 1930s and well beyond were inscrutable, the works in his waning creative years seem far clearer and direct in their symbolism.

Is the wounded watch Dalí himself?

Is there really any other way to interpret The Wounded Soft Watch than to see it as a metaphor for the impending physical failure of the artist himself? Although Dalí still appeared in pretty solid shape at this point in his life (he was 70) – and indeed I myself was in his presence in 1974 at the St. Regis Hotel in New York City, and he looked fit – it would not be much longer before his health began to slide.

Can we not, therefore, view the watch in the present painting as the body of Dalí himself, wounded and requiring the help of four crutch-carrying assistants? Indeed, the watch itself has a kind of human-like shape to it, doesn’t it?

For Dalí, of course, it was not enough to have just any four individuals rescue this limp watchman – this embodiment of the man who invented the concept; two of them had to be angels, one gallantly on horseback.

Is this interpretation plausible? You’ll have to decide for yourself. Admittedly, Dalí wasn’t normally prone to discussing or acknowledging his physical deficits. He never wanted to show weakness of body, mind, or spirit.

And yet, in his final years, that wasn’t as true as in his younger days. His remarkable painting, Bed, Chair and Bedside Table Ferociously Attacking a Cello (1983), is an example: it lays bare the reality of Dalí’s personal torment – and his awareness of it. 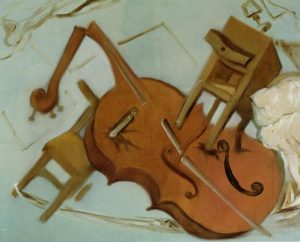 In future posts, from time to time, I want to examine several other of the very last works of Salvador Dalí. They should by no means be a life unexamined.